Can I Interest You?

Features a Preview of EACh Peek Now!

Links to my Favorite Places

The article below is from the BBC.  Visit the source for additional images accompanying the article.

The 71m-tall statue, a Unesco heritage site, was carved out of a rockface near Chengdu in Sichuan province around the eighth century AD.

It is normally high above the waterline, but the area has been hit by the worst flooding in 70 years.

The statue is a hugely popular attraction and often included in cruises along the nearby Yangtze river and Three Gorges.

State media said 180 tourists had be rescued from the site as waters rose. 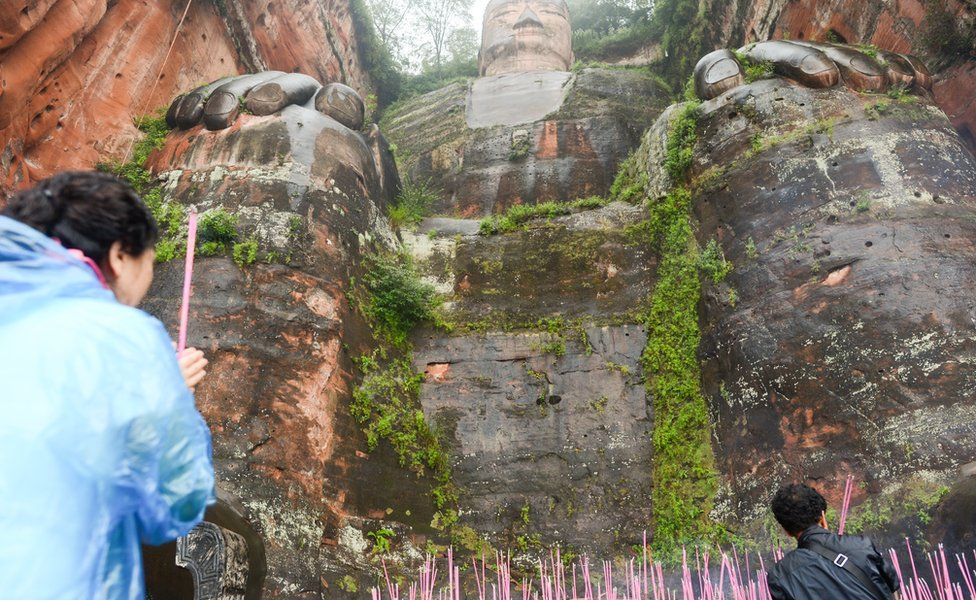 Tourists and pilgrims arrive by boat to burn offerings at the Buddha’s feet.  Getty Images.

According to the Xinhua state news agency, a traditional local saying holds that if the Buddha’s feet get wet, Chengdu – which has a population of 16 million people – will flood too.

Sichuan province has activated its highest level emergency response after weeks of heavy rain caused record high water levels, with no sign of it ending soon.

Flood alerts are in place for provinces around the Yangtze, Yellow, Hai, Songhua and Liao rivers, with warnings of possible landslides.

The statue, just outside Chengdu, is a hugely popular attraction and often included in cruises along the nearby Yangtze.

Officials have warned that huge volumes of water are building up behind the Three Gorges dam – a massive hydroelectric project on the Yangtze.

The Ministry of Water Resources has warned this could lead to severe flooding upstream, including the major city of Chongqing.

I manage two blogs - Elle's Adventure in China (EACh) and Read and Write Here (R&WH). EACh currently has China-related content from reputable news sources. R&WH is to express my creativity through writing, art, jewelry, and to inform others. View all posts by Leanne

Have something to say or ask? Cancel reply